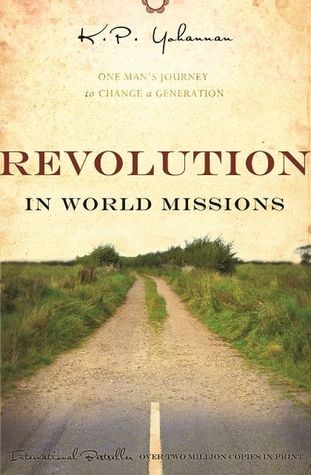 “As I studied the Gospels, it became clear to me that Jesus understood well the principle of reaching the poor.  He avoided the major cities, the rich, the famous and the powerful, concentrating His ministry on the poor laboring class.  If we reach the poor, we have touched the masses of [the world]” (Yohannan 29).  This is the premise of K.P. Yohannan’s book, Revolution in World Missions.  First published in 1986, Revolution in World Missions has been revised several times and remains popular with more than 2 million copies in print.  Despite the updates, Yohannan’s message remains the same – followers of Jesus Christ are in a battle to win souls.  He argues, however, that in foreign countries soul-winning is now occurring primarily through the work of native believers.  “These national Christians – humble, obscure pioneers of the Gospel – are taking up the banner of the cross where the colonial-era missions left off” (Yohannan 17).  Yohannan illustrates this view through three main points – missionary waves, native missionaries, and western thinking.

Missionary Waves
Since the beginning of church history there have been three waves of Christian missions.  The first wave occurred when the apostles obeyed the Great Commission in the first century, New Testament world.  The second wave arose with William Carey’s pioneer work in the 18thcentury to India.  This opened the door to a flood of 19th and 20th century missionaries to great European powers (Yohannan 17).  The third wave, happening in the present tense, is the native missionary movement.  More so than ever before, national missionaries are stepping out of the shadows of Western missionaries as modern mission leaders.  However, they still need our help.  There is a great partnership growing between the needy churches of the east and the wealthy churches of the west not seen in the previous two waves.  But, this transformation does include it’s fair share of conflict.  On the one hand, Western missionaries are “stuck in their ways” and unwilling to embrace new methods of missions.  On the other hand, natives of foreign countries in the Two-Thirds world are becoming more hesitant toward light-skinned missionaries, labeling them untrustworthy.  Is it fair?  No.  But as a result more and more countries are no longer permitting new mission groups from entering their country and have begun kicking out the missionaries who are already there.  And, the ones who do remain are usually only providing humanitarian aid.  To that notion Yohannan writes, “Social concern is a natural fruit of the Gospel.  But to put it first is to put the cart before the horse; and from experience, we have seen it fail in India for more than 200 years” (Yohannan 103).

Native Missionaries
Native missionaries, as outlined by Yohannan, are the best method for reaching the lost (with Western churches providing a financial foundation).  One of the biggest advantages to native missionaries is their understanding of cultural, historical, and political differences.  What takes Western missionaries years to learn through school and on-the-field training, native missionaries already know.  In this regard, native missionaries hold more credibility than Western missionaries.  Cost is the second largest advantage to native missionaries.  While it may cost upwards of $60,000 a year to support a missionary and his or her family overseas, a native missionary continues to live in poverty among their people.  If executed as Yohannan suggests, that $60,000 could be used to sponsor 20 native missionaries and their families – allowing more people to be reached.  That is a startling statistic.  Another alarming truth is the vast amount of money we spend on our church buildings.  While visiting Dallas, Texas a pastor showed Yohannan his newest church building that cost $74 million.  “While this thought was still exploding in my mind, he pointed out another $7 million church building going up less than a minute away.  These extravagant buildings are insanity from a Two-Thirds World perspective” (Yohannan 45).  The $74 million spent on this one church building could have gone towards building 7,000+ churches in India.  Seven thousand churches “would be enough to guarantee that the Good News of Jesus Christ could be proclaimed to a whole Indian state – or even some of the smaller countries of Asia” (Yohannan 45).

Western Thinking
While all signs point to the benefits of native missionaries, most non-profits and church organizations have not yet adopted the practice.  And, the groups that have started supporting native evangelists do not realize that many of them are only meeting physical needs while failing to win converts.  The author is quick to point out that there is nothing wrong with charitable acts – but they are not to be confused with preaching the Gospel.  Hunger, disease, and death are evidence of Satan’s hold on the world.  But as Yohannan writes, “to try to fight this terrible enemy with only physical weapons is like fighting tanks with stones” (Yohannan 14).  There is balance and importance to both – “we cannot say we love others if we ignore their spiritual needs.  Just the same, we cannot say we love others if we ignore their physical needs.  Jesus came for both” (Yohannan 118).

This book challenged my understanding of how to “do” world missions.  Yohannan describes his plan to evangelize the lost with the profundity of simplicity, bypassing the complexity of technology.  As Westerners, we believe that we have the greatest, do the best, and know the most.  Yohannan strongly disagrees.  To exemplify this point he shares a story when he first came to the United States to meet with American pastors.  “My hosts eagerly pointed out what they considered their greatest achievements.  I nodded with politeness as they showed me their huge churches, high-rise buildings and universities.  But these didn’t impress me very much.  After all, I had seen the Golden Temple in Amritsar, the Taj Mahal, the Palaces of Jhansi, the University of Baroda in Gujarat” (Yohannan 41).  He goes on to say that what does impress the Two-Thirds world is fresh water available 24 hours a day, unlimited electrical power, telephones that work and a most remarkable network of paved roads – the things most Americans take for granted.

Yohannan’s point of view is that mission work does not need all the bells and whistles that Western missionaries often bring with them overseas.  Furthermore, he believes that Western missionaries are less fruitful and their time and resources could be better spent training and funding native missionaries.  As a hopeful missionary (and artist through communicating), this disturbed me because I felt unwanted.  But at the same time, my hope is that the unbelievers would receive the Gospel and come to repentance – regardless if I am the method in which Christ uses.  Therefore, I have to ask myself – would my talents be better spent living in a cross-cultural setting while coaching international missionaries to return to their home country and spread the Gospel?  I’m not sure.