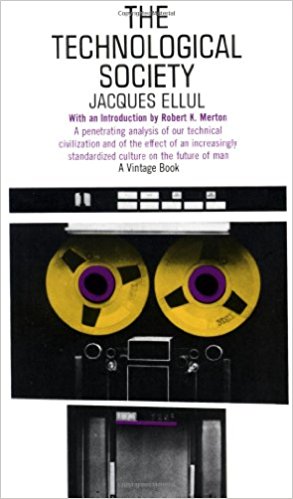 In The Technological Society, Jacques Ellul delineates the essence of modern society’s relationship to technique. Ellul writes from a French culture bombarded with consumerism during the Cold War. His prophetic text analyzes culture and reveals a seemingly unavoidable conclusion – humans have become subject to technique.

What is technique? He describes it as “the ensemble of practices by which one uses available resources in order to achieve certain valued ends” (Ellul 18). Technique, as distinguished from its individual techniques, is the overarching collection of means in society.

From the beginning of life humans have used techniques for specific ends. But in the eighteenth century, the multiplicity and efficiency of these techniques, along with the establishment of a few necessary social conditions, created a new phenomenon – the rule of technique over humanity.

Ellul’s book presents both an individual psychology and a history of culture. He is not optimistic. It is impossible to be free from the rule of technique, and it is a new human condition unlike any before. Its consequences are detrimental to natural human personality, creating a culture of “mass men” who may appear to be happy but lack any freedom.

As a Christian, Ellul sees the most revolutionary act as that of testification. In The Technological Society, he is a witness to the crisis of culture, and therefore paves the way for a new revolution. We can join with Ellul in bearing witness to the fact that our hope is not in this world, but in the risen savior Jesus Christ.

The problem with most definitions of technique is that they are limited. The phenomenon Ellul is describing is not a specific mechanical operation -it encompasses other aspects of society as well, for example economics or psychology. It also is not solely about productivity. Instruments of destruction, for example atomic bombs and war machines, are some of the most technical creations.

Technique is much broader. It includes all the means by which valued ends are achieved. “Valued ends” vary, including riches, power or affection. And the means to those ends can be mechanical, such as assembly lines or machines, or personal, including government, medicine or family (Ellul 18). So when Ellul refers to technique, he is not referring to a single means to an end, but rather to the whole arrangement of those techniques which shape a society.

THE STORY OF TECHNIQUE

Technique is not new, but since the eighteenth century it has a new relationship to society. In order to understand modern technique, we much understand how it came to be. Ellul claims the origin of technique is as old and mysterious as life itself. “Our modern worship of technique derives from man’s ancestral worship of the mysterious and marvelous character of his own handiwork” (Ellul 24). Humans have always used technique as a means for inventing.

The spread of Christianity, Ellul claims, actually hindered the progress of technique. Christians were opposed to the worldly values of money and power and instead directed themselves towards the eschatological City of God. Because the world was considered officially Christian until the fourteenth century, little technical progress was made during this time. “When an element of technique appeared to be righteous from every point of view, it was adopted, but even then with excessive caution” (Ellul 37). Public society had theological reasons to check the progression of technique.

When the rise of humanism during the Renaissance replaced Christian principles, there was no longer a public check against the progress of technique. The impulse to create new means was felt, but the framework to implement those means was not yet in place. For example, intellectual works were published, but they were universal rather than specialized. Ellul says, “Not the subject but the author dominated the work: this tendency itself is contrary to technical inquiry” (Ellul 40). In the Renaissance most books were not technical reference manuals, which are key to technical progress, but rather cross-discipline ramblings of an author’s entire view of life.

It was not until the Industrial Revolution in the eighteenth century that technique took on its modern characteristics. By then all the necessary aspects of society were in place for a technical revolution. Ellul analyzes the five social conditions needed to produce modern technique: history had freed technique to mature without checks, the population had grown substantially, economies prospered, transportation allowed people to travel freely and society valued technical results. All five of these aspects together gave rise to the new nature of technique that we encounter today.

Ellul claims that technique is no longer simply a mediator of the world; it has created a new reality that humanity must adapt to or perish.

Ellul likens the new relationship to the effects of a military shell. From a physical perspective, 50 shells explode in an identical manner. They produce the same shrapnel, smoke, sound and light. But 49 shells that explode in a remote desert have drastically different effects than one shell that lands in a platoon of soldiers (Ellul 63). In the same way, it is not the individual properties of technique that determines its significance, but its overall relationship with society.

For technique, nothing is sacred, thus, technique itself  becomes the new sacred. Ellul defines the sacred as what man decides unconsciously to respect. Whereas science explains the “how,” of mysteries, technique desacralizes mystery by putting it to use. For the working man, there is no mystery, but only that which has not been technicized. Ellul says, “The technician uses technique perhaps because it is his profession,but he does so with adoration because for him technique is the locus of the sacred” (Ellul 144). Because technique puts to use all it comes into contact with, humanity replaces the sacred with it’s captor; technique.

Technique affects all aspects of humanity, from economics and politics to “human techniques” of education, propaganda and sport. A large part of The Technological Society explores these effects to their limits.

For Ellul, the most characteristic of all modern technical instruments is the clock. Because of the clock, humans are no longer ruled by natural rhythms, but mechanical. Whenever technique comes into contact with a natural obstacle, it either modifies nature with a machine or transforms nature’s preference through the use of other techniques (Ellul 135). Technique is rational and it must be applied, which creates an artificial reality.

Modern technique is inescapable and creates artificial happiness. Political ideologies, social revolutions and even individual art cannot escape technique. Ellul does not trust democracy. He goes to great lengths to show that the same political technique guides communism toward power and capitalism toward money. State technique is dominated by planning that takes into consideration outlets for revolution, all for its own interest.

Even personal expressions of angst against technique, as seen in modern art, are proof of the pervasive hold of technique over humanity. Technique coerces humanity by utilizing integrated techniques of entertainment and propaganda. In the forward, Robert Merton says, “The technological society requires men to be content with what they are required to like; for those who are not content, it provides distractions– escape into absorption with technically dominated media of popular culture and communication” (Ellul viii). By so systematically studying and exploiting human nature, technique guides humanity towards its own ends of efficient organization.

Ellul thoroughly and persuasively describes the conditions of a hopelessly enslaved humanity, but leaves open the possibility of an entirely new reality. Surprisingly, as the translator John Wilkinson says, he never articulates what he means by the “natural” condition of man, to which technique is so opposed. Wilkinson says, “The best answer seems to be that he considers “natural” (in the good sense) any environment able to satisfy man’s material needs, if it leaves him free to use it as means to achieve his individual, internally generated ends” (Ellul xix). To be free from technique man must be able to use means to achieve his own ends.

The Technological Society is a voice of conscience and a prophetic warning. Individually, our hope cannot be in systems of this world or the grandeur of freedom through technological improvement, but I wonder if we do not act like we live in that new reality. Corporately, the Church must bear witness to the risen savior Jesus Christ and not perpetuate systems of the world, but I wonder if many churches instead preach propaganda and look no different than a social club. Culture cannot be freed from technique by more technique. We need revelation with revolution.