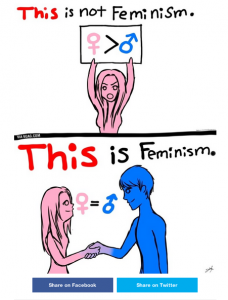 I came across this little cartoon while checking Facebook today. It caught my eye, I like to see positive messages being shared on the Web, since so often its a pile of crap. So, anyway, I clicked on the link which brought me to the larger version of the image, which showed also the bottom image, “This is Feminism.” The image shows a pink woman and a blue man shaking hands, as they do their colors spread to each other.

This may not be a perfect image of what feminism was first meant to be, but it sure sends the point about what feminism is not. I appreciate that, the effort to debunk the myth that all feminists are trying to take over and to show that we are superior over men. No, that is not what the early feminist writers like Charlotte Perkins Gilman and Kate Chopin were fighting for. If we would just read some of their literature it is plain to see they only wanted to be seen as humans, and treated as such.

If you click the link below to go to the website this cartoon can be found at, you will notice the comments. Okay, this is where I lose a great amount of my hope for humanity. People say some really uneducated, thoughtless, provocative things online. So, just a warning, it can be discouraging to read some of the comments, but I read through some because I want to be aware of how people think on this topic.

Some comments suggested changing the name, pointing out that “Feminism” may have a certain connotation to it if we really are seeking equality and not females dominating males. This is something worth thinking about, and maybe when speaking about feminism to a group who feels this way, we ought to consider changing the nomenclature, for the sake of getting somewhere in the issue and not getting hung up on the terminology!