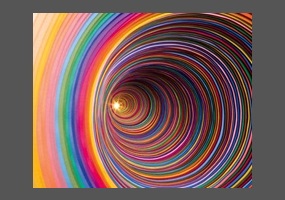 There are no secrets here. From the title, to the introduction, to very first sentence of chapter one H. R. Rookmaaker makes his purpose in Modern Art and the Death of a Culture unmistakable. In his own words: “to discuss modern art, its meaning and its relation to the contemporary cultural scene at large” (11).  And his title makes his position clear: that modern art’s relationship to contemporary culture is one of death.

To reach this end Rookmaaker uses his expertise as an art historian to walk his audience through the progression of art, primarily in the field of painting. He begins in the 1300’s with icon paintings and marches steadily right up to the cover of Time in 1969 –just one year before the book was published.

This tour through history consumes most of the book, but not without purpose. Rookmaaker asserts that in order to understand modern art we must understand the art before it, specifically the art before our time, art before the Enlighenment. In recounting major art movements from 1300 to 1970 Rookmaaker focuses on the cultural changes in schools of thought, philosophy, the role of religion, and worldviews and how these elements were reflected in the art of the time. By beginning with icon paintings with Biblical subject matter he is able to give the audience a framework of how art can be and has been. Particularly how Biblical themes and Christian worldviews were once painted.

But Rookmaaker is careful not to be one sided. He gives an example of different worldviews by pitting landscape artists van Goyen and Poussin against each other. Rookmaaker shows how each man’s worldview is displayed in his painting –even in a painting of a landscape with no Christian or non-Christian symbols (18-23).

He moves quickly into the Reformation, which presents some roots of the Church’s break from art. But more important to Rookmaaker at this stage is the progression from Reformation to Enlightenment and the change in the school of thought between these times. By the end of the Enlightenment and the Age of Reason Rookmaaker says, “man is in a box.” A box that contains only that reality which can be understood by reason and science –so God was left outside. This marks an important switch for the culture and therefore for the artist and the art –and the first steps to modern art.

Rookmaaker pegs modern art as a result of the Enlightenment. He calls it both a reaction against it and simultaneously dependent upon it. In the Christian sphere during this time the artists are suspiciously quiet and the ones who joined the conversation add only an odd demythologized art. At this point Rookmaaker breaks from his art history journey and commentates more specifically on the Christian attitude toward art saying, “For centuries evangelical Christians have steered clear of art, and so lost their critical powers and any real understanding of the arts” (75).

Art seems to spiral out of control as the fallout of the Enlightenment continues to make waves through the centuries. Naturalism, realism, impressionism and art nouveau give way to expressionism, and art becomes capital ‘A’ Art, and abstraction digs for the truth underneath –the final steps to modern art.

The way in which Rookmaaker traces the development of art with major worldview shifts throughout the ages binds the art and the worldviews inextricably together. In the end Rookmaaker seems to say that modern art reflects only despair, frustration, destructive anger, and the loss of norms in society and art. Though the modern artists are in a way revolting against the unjust, dehumanizing world, they have no other worldview to operate from than the one they revolt against. Rookmaaker prophesies that the only place they have to go is to a more secularized word.

But is Rookmaaker right? Is modern art only a reflection of a worldview and a broken one at that? Does modern art really tell the story of the death of culture? Has modern art won the battle?

In many ways Rookmaaker generates more questions than he answers. His book is helpful as a starting place to understanding the climate that gave birth to modern art. But more than forty years after its publication, Modern Art and the Death of a Culture must be handled with some care. It is certainly a strong commentary on the growth and change of worldviews and art with helpful insights into the Christians role. But in some ways it seems to be too narrow.

Though Rookmaaker does not outright discount all modern art, he certainly has no praise for it. Now forty years later it is curious to speculate what he would have to say about today’s modern art. I suspect there is more good in it than Rookmaaker was able to or willing to see at the time.

Though much of the book is dedicated to the discussion on modern art, Rookmaaker dedicates sections throughout (including the entire last chapter) to the role of Christians in art. His comment noted earlier captures his view well. He is scathing in his criticism of Christianity’s failure and yet equally generous in his encouragement. He accuses Christian arts of “pseudo-devotional sentimentality” born of a lack of exegesis and guilty of inviting the audience “to give it meaning, within us, in our feelings…” (75). His analysis seems all to right of Christianity’s cheap art. In response Rookmaaker calls for Christian artists to rise up. He defends our right to create and commissions Christian artists.

But Rookmaaker doesn’t satisfy. The reader comes away asking for more. For an art lover who has been looking at modern art and trying to see it well and even love it, Rookmaaker’s assessment is disheartening. Perhaps it is my inescapable post-Enlightenment, postmodern lens that keeps me from agreeing fully with his diagnosis of modern art. And it’s difficult to know if the fault is in the reader or the writer. Modern art is so strongly presented as a tragic reflection of a broken world that it seems there is nothing left but to weep and do our best to create images of truth and beauty to give the world hope.

And yes we ought to weep, pray, and keep creating. Rookmaaker leaves the door open for an easy dismissal of modern art, though he himself does not walk through it. But we must also continue to press into modern art, to seek to understand it and it’s artists.