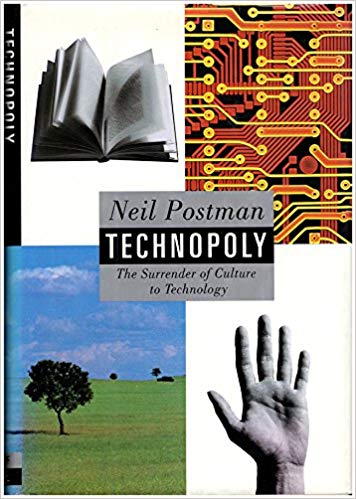 In his book Technopoly Neil Postman begins his dialogue with a story called the Judgment of Thamus, and uses this story to ground the premise of his book. He then moves on to examine three technological cultures which he labels as: tool based culture, technocracy, and finally the climatic pinnacle of the growing technologies, the technopoly.

The Judgment of Thamus is the Greek story of the god Theuth who invented the art of writing. When presenting this prestigious new invention before king Thamus, Theuth bragged about its potential and importance, and the necessity to teach this new invention to others. Thamus responds with a two-fold answer. The first being that the inventor of the craft is not the best judge of the benefits or harms it may bring about because he is biased towards the good and blinded to the bad. The second point king Thamus makes is that the invention of writing will destroy the use of memory because the people no longer need commit to remembering and storing knowledge because it will be written down for them. Thus, they will become a lazy people and culture more ignorant than they were before the invention of writing. Postman tells this story not to critique the idea of technology, for indeed he actually critiques Thamus for focusing on the negatives of writing and not citing the benefits that writing brought with it. However, this story is important for Postman because he uses it to help people understand that the creators and inventions and people immersed in the society of technology are people “who see only what new technologies can do and are incapable of imagining what they will undo” (5). The premise of Postman’s Technopoly is that “every culture must negotiate with technology whether it does so intelligently or not” (5); and the modern American culture has come so far down this line of integrating technology (often times unawares of the adverse effects) that it has, in a sense, enslaved itself to the bonds of technology such that technology is now a technopoly.

This slipping into a technopoly was not a sudden event, but rather a gradual task that developed from a tool-using culture, to a technocracy, to its current location, the technopoly. Postman explains the first stage of this movement by defining what sets apart a tool using culture. He says, “The main characteristic of all tool-using cultures is that their tools were largely invented to do two things: to solve specific and urgent problems of physical life… or to serve the symbolic world of art, politics, myth, ritual, and religion” (23). More specifically, the tools within this culture did not stop or detract from traditional and standardized practices of a culture. They did not detract from the normal way of life. And more importantly they did not stop traditions or peoples’ belief in God, their view of education, or politics. These structures actually provided (and still do provide in modern tool-using cultures) the necessary statues and limitations by which people are able to understand their world and the technologies therein. These technologies then are subject to religion and other social norms that define their proper place in relation to the society as a whole. In this society technology does not run wild, nor does it play a central role in mind of the culture.

A tool-using culture moves to a technocracy however, when the “tools play a central role in the thought-world of the culture” and “everything must give way, in some degree, to their development” (28). One such example given in the book is that of the telescope. Whereas man had previously thought the earth to be the center of the cosmos, and all else revolved around man’s planet, the telescope drastically changed that ideology. Instead, this new technology revealed man to be a mere spec on a wandering planet that rotated around some other object in space. This led to the question of man’s value since he was no longer the center of the universe, and left him unsure if God had any true interest in him at all (29). Another such example of the sudden integration of technology was the industrial revolution. This was a massive change in the social landscape by which more and more jobs became mechanized. Thus, the mechanized jobs became the only hope for the poor (38). Slowly and methodically the technologies of man encroached into the culture and began forming the thought that governed the society. Postman notes, “Tools have a way of intruding on even the most unified set of cultural beliefs. There are limits to the power of both theology and metaphysics, and technology has business to do which sometimes cannot be stayed by any force” (26). However, the greatest invention was to come later in the nineteenth century.

The greatest invention came in the nineteenth century, and this invention developed the technocracy into the technopoly. This invention was the idea of invention itself. “We had learned how to invent things, and the question of why we invent things receded in importance… if something could be done it should be done” (42). This became the invention, the creation without boundaries, borders, or possible limits that led to technopoly. For it is here that technology takes a deep grasp on society. All other alternatives to technology are eclipsed. They are not considered illegal or immoral. They are irrelevant. Postman describes technopoly as “totalitarian technocracy” such that the tools become loudest and most important voice in the society (48). The Scopes Trial is an example of this transition from a culture formerly based in theological and religious convictions to a culture that now prizes the quantifiable, knowable, scientific approach because man can now know truth apart from religion, or any other such ideology. This is possible because his technology enables him to measure, qualify, and quantify information. In a sense, people in a technopoly are less important than their machinery because they can make mistakes, but the machine cannot (52, 55). A technopoly is also characterized by an over abundance of technology information. So much information that there is no logical framework for processing the information so control structures are created. But when those structures are created they require more technology and information to manage them. This is made obvious in modern American culture by looking at all the social institutions created to run everything else. There are now specialists in every field. There are specialists to raise children, specialists on medicine, specialists on specific types of doctoring, experts on how to make friends, and a host of other experts. All these are working in accordance with technology, which tells them how something ought to be.

Postman’s point is not to demonize technology or mediums of communication. Rather, he is pointing out how technology has changed cultures. Technology has such great influence that it is now driving and shaping culture. His cry at the end of the book is to not lose sight of the individual, the real person, in light of the technological revolutions that have brought man to where he is today. Be savvy, be wise, but also be loyal to the person before the machine.

To examine the point made by Postman (quoted at the end of the 4th paragraph) on theology. It ought to be noted that if a technology infiltrates into a church, or the Body of Christ, without a proper theological framework for its implementation, it is not necessarily because it is more powerful than the church and her dogmas and doctrines. Rather, it is possible that it has slipped in under the confusion caused by a different technology, namely the printing press. For the printing press made man a type of pastor and theologian unto himself with access to the printed word of Scripture apart from the authority or guidance of the church. Thus, with the individualization of the Christian faith there also came an aspect of lost learning and training in true theology. How then could there be a united theology on technology and its subjection within culture and the church, when the church was (and is) suffering from individualistic theology brought about partly by a piece of technology? It is not that theology is less powerful than the media or technology, but that the church must be unified and strong in theological training in order to convey any specific Biblically grounded and theological truth claim as to the place of technology within the Body of Christ and the culture at large. However, the mere fact that the printing press dramatically changed the social and cultural climate of the church, and the world, testifies to Postman’s assertion. Technology, in a technocracy and even more so in a technopoly, plays a “central role in the thought world of the culture.”