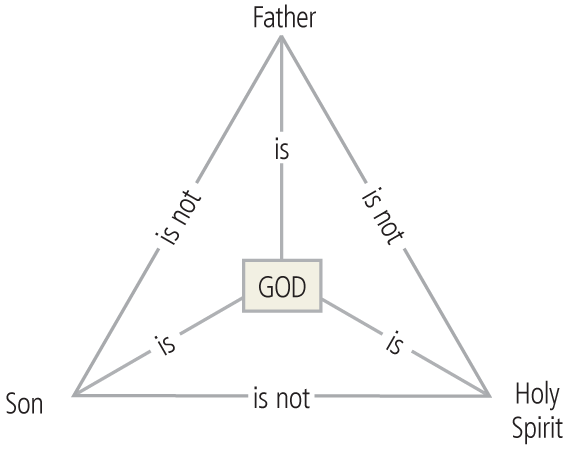 For its entire existence the Church has affirmed the fact that both the Trinity and the incarnation ought to inform the theology of the Church and her members. That apart from Jesus Christ, the incarnate Son of God, and the scriptures became meaningless and devoid of their power. Apart from Jesus, the scriptures became just another book. The incarnation and Trinity must also inform the artistic theologian. For these two are the pillars of creativity and ministry.
“And God said, ‘let us make man in Our image, according to Our likeness’? (Genesis 1:26). Here within the Trinity is the first model of communications. God said within His triune self. God the Father, God the Son, and God the Holy Spirit communicated between one another. The realization is incredible! It is because God is triune that man is capable of communicating. If God were not triune, if he existed as a solitary being, what necessity would there be for communicating? There would be none. Indeed, communication itself exists for relationship. Therefore, when man communicates, he is participating in that which God said “let Us make man in our own image.? As man communicates he participates in the image of God. It is something sacred, though often times overlooked and taken for granted.

Yet the Trinity that creates is also the foundation for art. Psalms 19:1 says, “The heavens declare the glory of God, and the sky proclaims the work of His hands.? To the one who knows the triune God, the creation testifies to God’s glory. God did not simply create abstract from Himself. Instead, His works reflect parts of His nature (for example, man being crafted in His image, reflects the nature of God). Indeed, Christ Himself holds His creation together, reveals the Father (Colossians 1 & Hebrews 1). It is from this foundation that the artist draws his creativity. For art is never devoid of its artist. The art work reflects the heart of the artist, his personality, different aspects of his nature. That in no way makes the art the artist, but for those who know the artist and understand his heart, they have special privilege into understanding the artist’s art. In this sense the artist is then in a special place, not because he is more important than someone else, but God has given the Christian artist the opportunity to understand and participate in a specific aspect of God that not many are able to do.

At the fall, man became estranged from God. Such was the separation that man’s concept of God and communication with Him became falsified and destroyed. Though man had spiritual things in his heart and mind he was unable to truly understand the triune God (Romans 1). However, God did not remain distant from His creation. Though man could not pursue God on his own, God pursued man and revealed Himself to humanity. He did this through the law and through the prophets. In this sense then, God used mediums to reveal Himself to mankind. In writing God revealed Himself as absolute, perfect, and unchanging as the tablets of stone He carved his law into (Exodus 34:1). And through the medium of a mouthpiece, the prophets, God revealed Himself as relational and communicative with man. Yet these mediums were not enough, and so finally, “Though long ago God spoke to the fathers by the prophets at different times and in different way. In these last days, He has spoken to us by His Son… The Son is the radiance of God’s glory and the exact expression of His nature? (Hebrews 1:1-3). God, in the incarnation of Jesus Christ, took on human flesh, no longer to be separated from His creation. He partook in the nastiness of life, felt the pain humanity felt, walked out the life that all men walked out (though without sin: Hebrews 4:15). The depiction is very clear: God who stopped at nothing to be physically present with His creation, culminating in the incarnation so that relationship might be truly and fully restored with the triune God.

One of the greatest threats to the modern Christian church is the disembodied man, the disincarnate. Where man is separated from his flesh and is inadvertently, or intentionally, made into a monistic being whose body is removed though his mind remains. Thus constituting that man, in his fullness, can be reduced to a mere product of his mind and mental capacities. The modern culture in the west has gone in the diametrically opposite direction that the Trinity and Incarnation has laid out for mankind. Whereas at the Fall man and God were estranged God moved past the mediums and took on flesh. Mankind after the fall, on the other hand, lived together in community reliant upon one another and being physically present in their oral based society, but then moved in the opposite direction. Each new medium allowed man to do something new. Yes, it has allowed man to craft a message and send it across long distances, but it has done something detrimental. With each new medium man was granted the ease of stepping further and further away from other men. God came to man in the flesh, man separates himself from other flesh and comes now in the digital realm all the while thinking he is still in community because he is “connected? via the internet, or a newspaper, or a letter, of phone call. For if man is merely reduced to his sensory perceptions then of course there is communal connection via facebook and twitter. Yet the incarnation testifies to something different. Christ did not come as a voice or a picture. He came as a physical man who was both the Word (John 1:1), and the exact image of God (Colossians 1:15). It is a powerful thing that God coming as man was not merely established by sounds or symbols, but rather the incarnation revealed the importance (and redemption) of both the body and the spirit of man tied together and redeemed in Jesus Christ constituting the full human. Yet now the culture seems to think it is possible to reach out without actually physically being present. The more mediums used the more disincarnate the community becomes. There is no true substitute for a physical tangible relationship with another human being.

Neil Postman writes that “we had learned how to invent things, and the question of why we invent things receded in importance? (Technopoly, 42). The same can be said for creating messages and sending messages. The church has bought into this idea on two extremes. On one hand the church attempts to craft messages of happiness and peace the moment a person accepts Christ or begins the journey of trusting God. There may be struggles, but everything works out in the end (Facing the Giants) and while I am not convinced these films have no place in Christian community, they are certainly propaganda pieces that do not express the difficulty of life and wrestling with God. And often times in this wrestling we do not get the answers we desperately want. On the other side there stands a group that so badly just wants to accurately capture the true essence of Christianity and the struggles of faith within the spiritual journey. I am not here to condemn the desire to craft a true message accurately depicting the struggles we all face as Christians. These certainly can be good. However, I am here to say that we need to take a step back and consider more than just trying to capture the perfect message or accurately depict “real life? and the struggles faced therein. It is time to wake up and realize that: sadly the church has become so caught up in creating messages and trying to capture moments, attempting to use every medium to its fullest potential, that it has forgotten to actually participate in the moment. There sometimes are no messages to be crafted and sent right away via a medium. When a terrorist attacks your home country and leaves over a hundred people murdered, sometimes there are no words to say. Instead there is only the option of being present with those hurting. Creativity ought never to eclipse the hurting and the opportunity to be truly present with people the same way the incarnate Christ came physically to us in our brokenness.